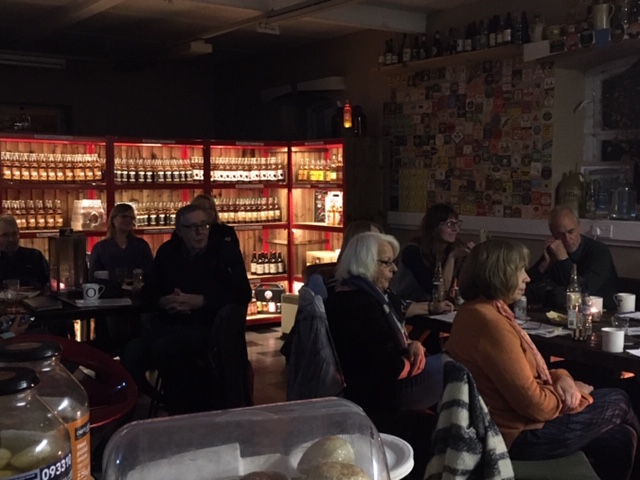 Local cider pub in Mitcheldean hosted an evening for Dean Writers Circle and Poets in Progress (PIPs) to share readings on the theme of autumn in the Forest – with a touch of the ghostly as a nod to Halloween. Some great stories and poems – humorous, ‘scary’ and apple, pig and even sheep themed (the Forest having ‘free sheep’, ie they roam where they like). I promised my aunt I’d put my story up so here it is

Supping
Sniff, sniff.
The smell taunted him, like it had done all day, filling his nostrils with its lush pungency.
He lifted his head, heavy jowls wobbling. Sparse whiskers quivered at the memories.
Here it came again, carried on the crisp air drifting through the doorway. Tempting him.
He sniffed again; salivating now.
Moving quietly, not wanting to disturb the others, he stole to the door and peered out,
black eyes narrowed to better examine the shadows.
All was quiet. The hens in the henhouse slept, safely locked away from foxes; the dog dozed
in the barn, curled in the straw; no lights reflected on the swept stones of the farmyard
where the scarred and bleached cider mill stood: the source of his temptation, standing
innocently quiet now.
Heedless of the autumnal chill, he stepped into the night. The gate opened at his push with
barely a squeal. He slipped through and up the rutted lane, kicking up the dry leaves which
the wind had swept into tidy piles. Down to the wider track he went, more quickly now. The
cold moonlight lit his way; the cloying fragrance steered him as surely as a stick pointing the
way.
The Brown Snout came into view, a black silhouette against the silver stars. He had it all to
himself and he made the most of that. Supping at the offerings, more please, more. Gulping
it down, the sweet stench dizzying his brain.
Ah! Near to satiation, he sat on his broad rump and wondered at the way the arching roof of
the Brown Snout wavered like a heat haze.
But there was another visit to make.
Out again into the colder night, pink skin warm and glowing, onto the Kingston. Others were
here; appeared to have been at it for a while, but they let him in, barely noticed his
presence. And again, he relished the long cool slide of heavenly bitterness down his gorge.
His stomach was stretched to its considerable limits, his fat legs tremulous. The world
around him spun as steadily as the handle of the cider press in the farmyard had done all
afternoon.
The farmyard. He turned homewards, shuffling up the track, past the Brown Snout, up the
lane. The gate had grown heavier since he left and he had to shove, hard, grunting with the
effort.
The gate shrieked its resistance and clanged shut.
A light came on. He knew he should hurry but he couldn’t. He knew he should be tucked up
with the others. But he wasn’t.
‘Eh! Who’s out there?’
A window screeched open.
‘Good Lord! Look who it be!’
Freddie wavered. He needed his bed.
‘It’s our Freddie!’
Thudding footsteps.
‘Freddie! What thee been up to?’
Freddie wobbled. Sleep beckoned him to welcome oblivion.
‘Been stuffing thyself on ciders, have thee, Freddie?’
Raucous laughter.
A slap on his bum sent Freddie stumbling into the straw.
‘Back to bed with thee! Bit of a sore head in the morning, hey? Thou silly old pig!’
Footnote:
Brown Snout and Kingston Black are English cider apples – not pubs…